The complex of San Lorenzo Maggiore is a path back in time that covers a historical period from the fifth century BC. C. until the end of the XVIII century AD. The complex is a perfectly preserved historical testimony of how the city has grown and evolved, a continuous mix of ancient and modern. In the complex of San Lorenzo Maggiore there are layers of different buildings, the result of various urban developments over the centuries.

These strata represent the civil, cultural, political and institutional changes of different civilizations, which share the same geographic space, unique in its kind; from the Agora to the Forum, from the foundations of the early Christian Basilica to the stronghold of the convent of the Franciscan friars, all coexisting in the cloister of San Lorenzo Maggiore. This site also hosted the seat of the city government, which can be found by visiting the archaeological area.

Going down about 10 meters the underground archaeological path develops on a narrow road (cardine), where you can observe various environments. First of all, the treasury, where the city’s public treasury was kept.

After the Treasury, nine shops of two rooms each follow, where elements of the commercial and craft activities carried out in the market are visible: such as, for example, an oven and tubs for dyeing fabrics. At the end of the hinge, on the right you reach the cryptoporticus (covered market) divided into small communicating rooms, each of which bears masonry counters, used for the display of goods.

The last room of the portico communicates with a new sector of the archaeological area: a large room in which a monumental water works dating back to the late Hellenistic market arrangement was visible, which served to channel the flow of water in a situation of strong slope. Next to the water works there is an area consisting of three large vaulted communicating rooms, with mosaic flooring and an impluvium in the central room. In the refined complex you can probably recognize a schola, that is a building intended for the meetings of religious associations or traders. Throughout this sector, remodelling of the walls of the late ancient and medieval ages can be observed.

At the bottom of the cloister, in the right corner, you can admire the Swabian cloister, through which you access the majestic Sixtus V room, formerly the seat of the refectory of the friars. The vaults are entirely frescoed and create an austere and intense atmosphere.

The frescoes were made by Luigi Rodriguez and date back to the early 17th century. The frescoes on the vault represent The Seven Real Virtues, surrounded by Four Minor Virtues; this meant that it was deserving to rule the kingdom only those who made these virtues their own.

Further down there are frescoes representing the provinces of the kingdom.

The room Sixtus V in 1442 became the seat of the Neapolitan Parliament; it was the scene of very important historical events, we will mention one of many: Alfonso of Aragon recognized his son Ferrante here as his successor.

Between two tuff paintings, through a 14th century portal, you can access an evocative environment with richly frescoed vaults: it is the Chapter room. It takes its name from the Chapter, or a meeting of friars that was held here, to confer the offices.

The chapter house was built at the time of the Swabian domination (1234-1266). The precious decorations in this room are attributed to Luigi Rodriguez and were made in 1608. They depict, in a grotesque decorative style, the friars of the order of Conventual Minors who have distinguished themselves for particular religious and cultural merits. The genealogical tree of Franciscan glory depicts missionary and literary friars as well as those who have become cardinals, popes and saints.

Many of the spaces of the complex are available for corporate events and for concerts. 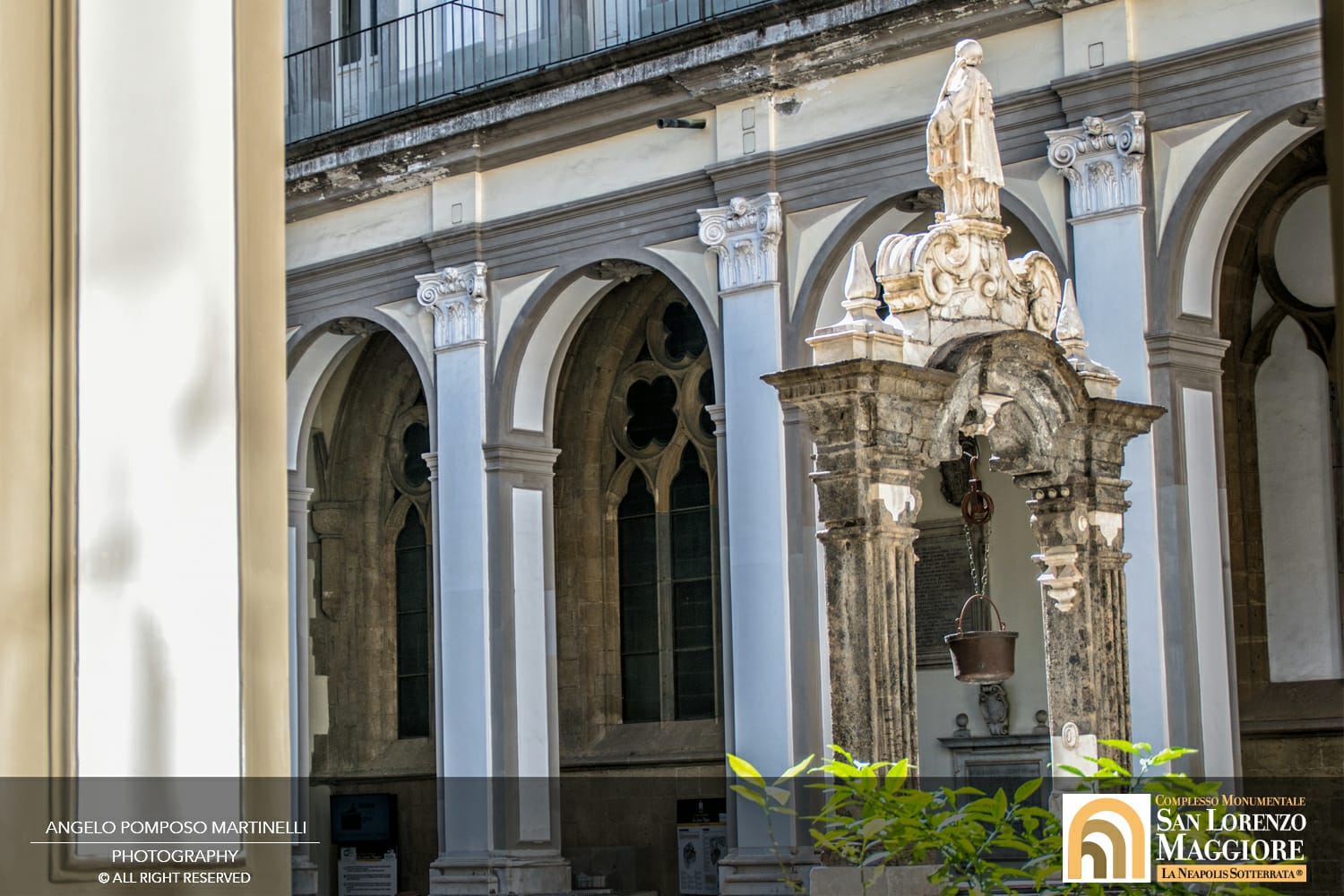 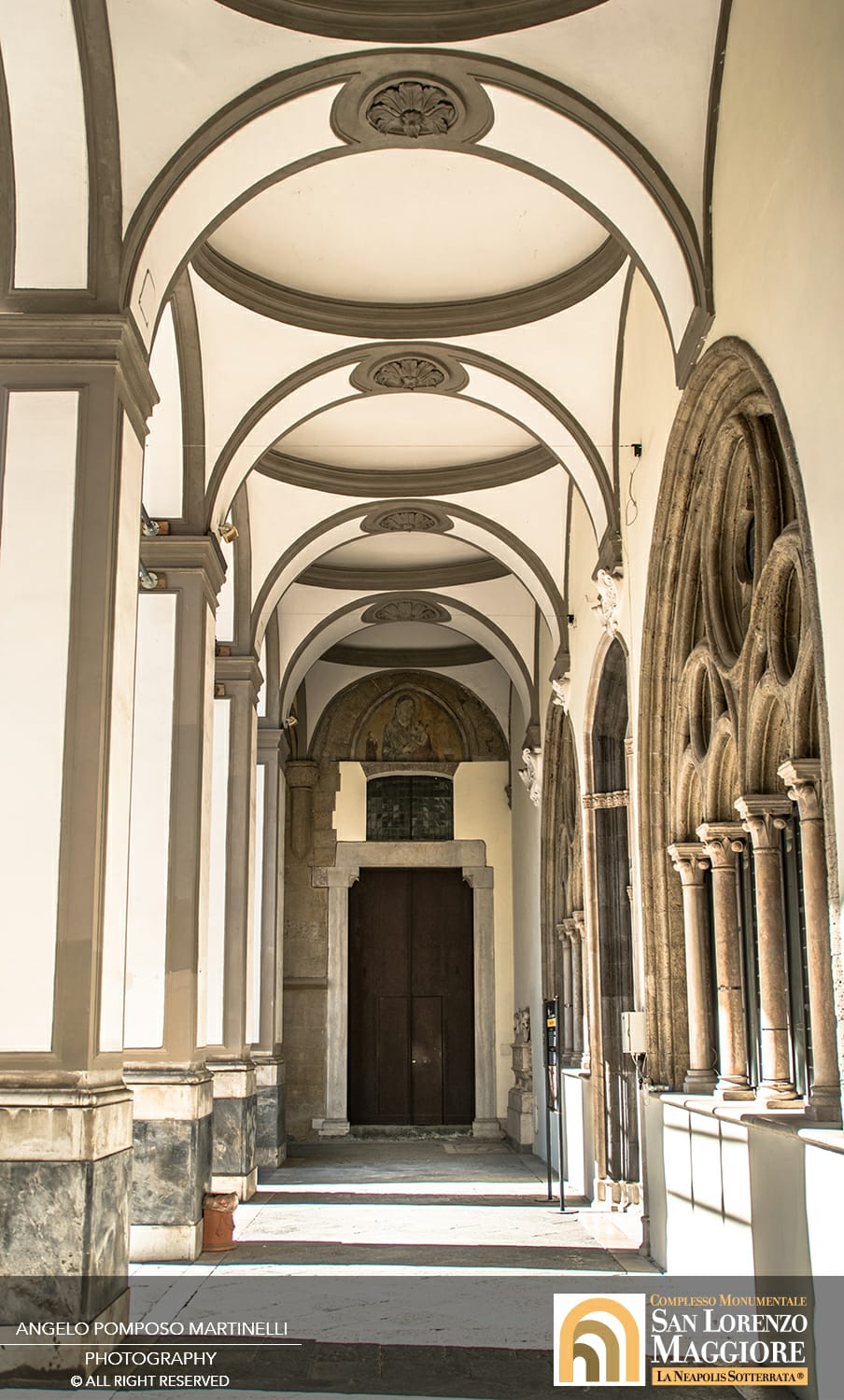 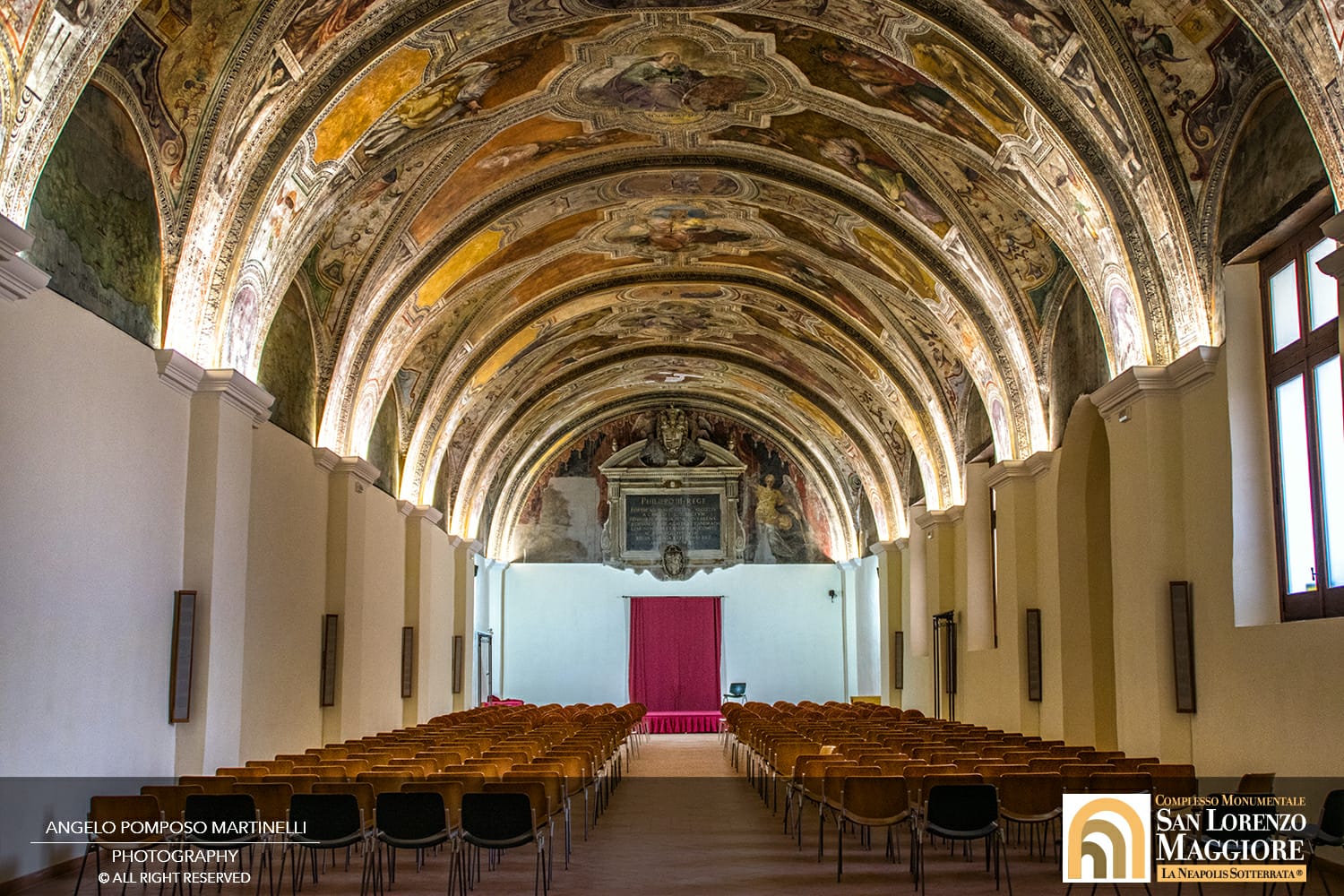 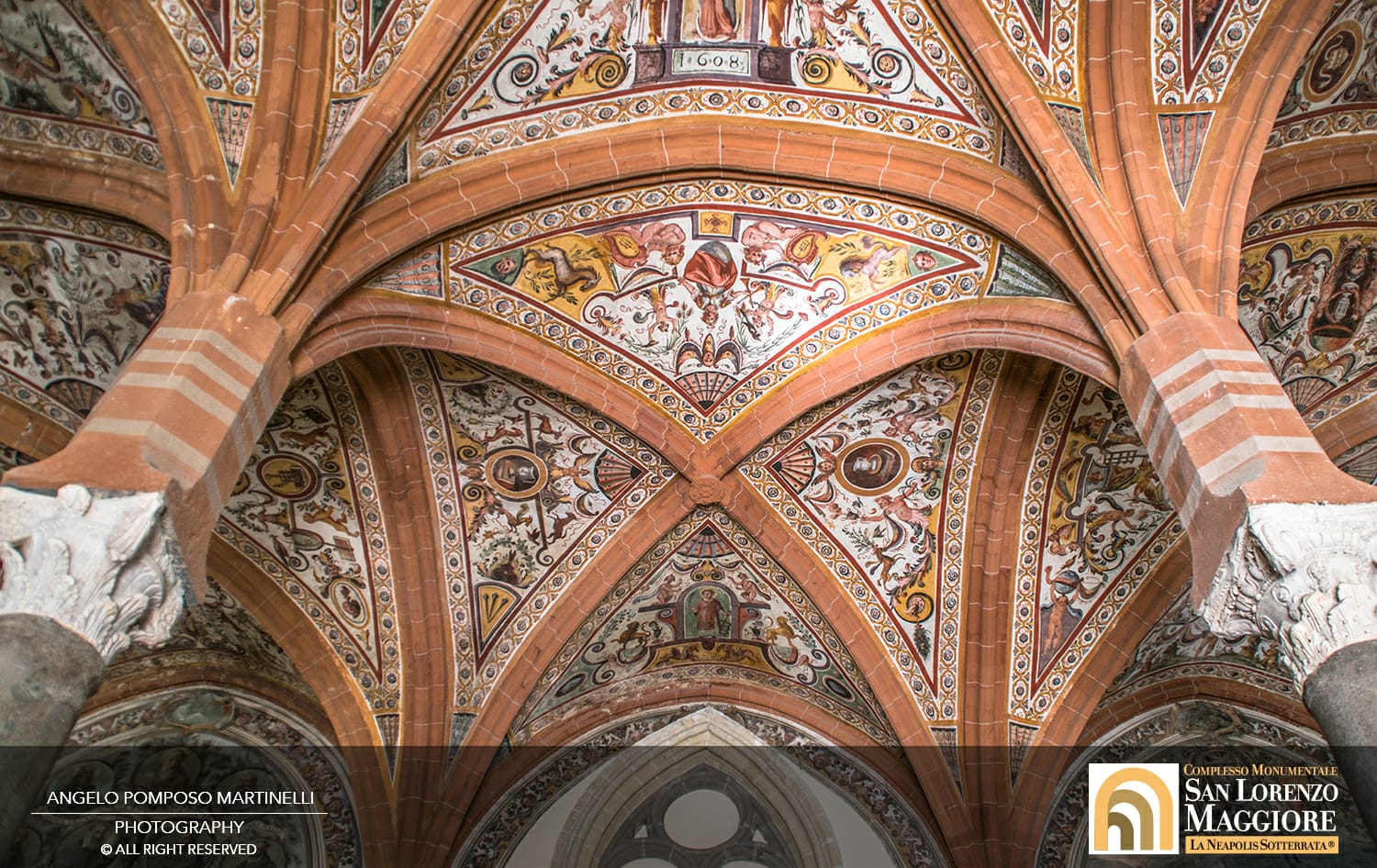 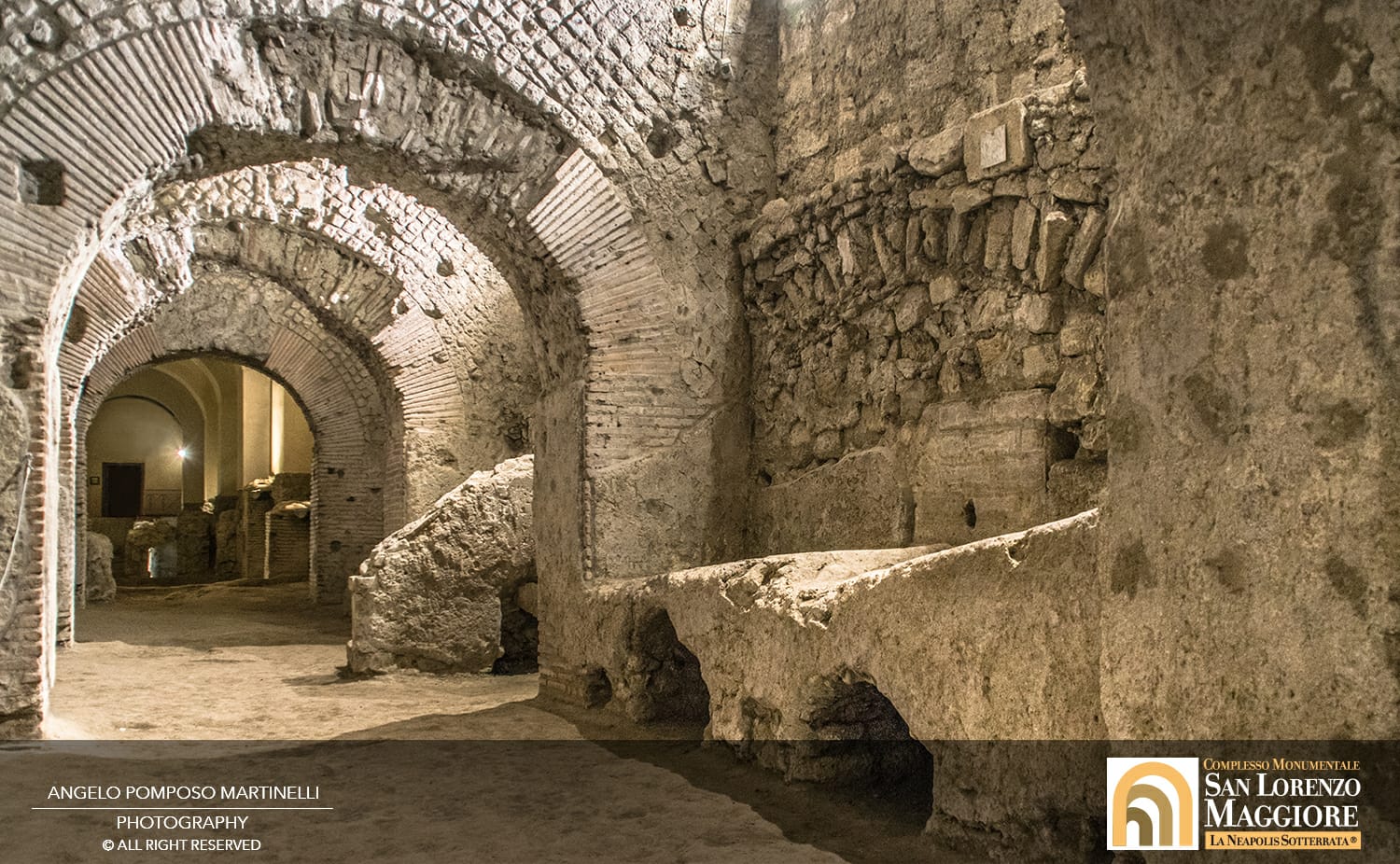 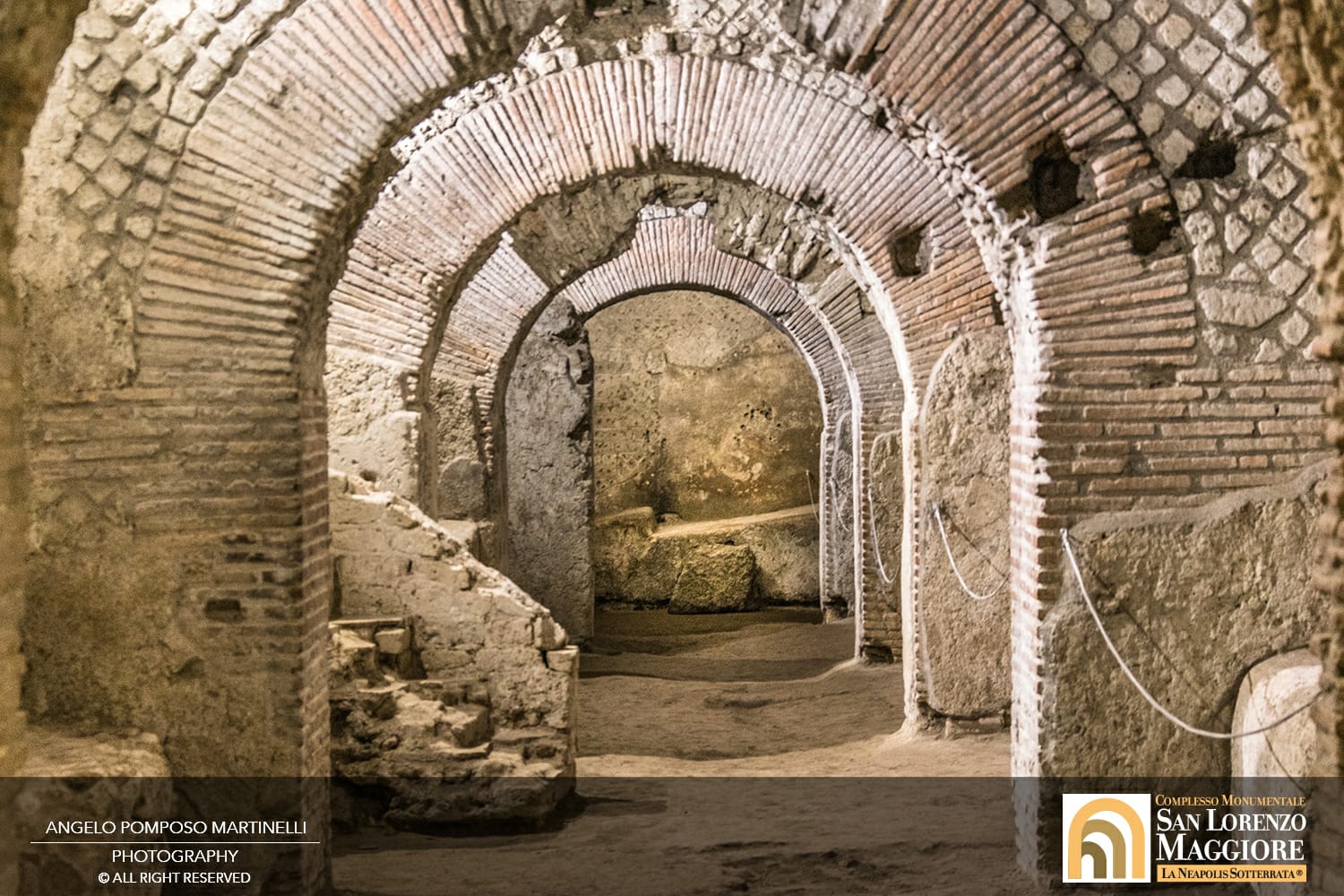 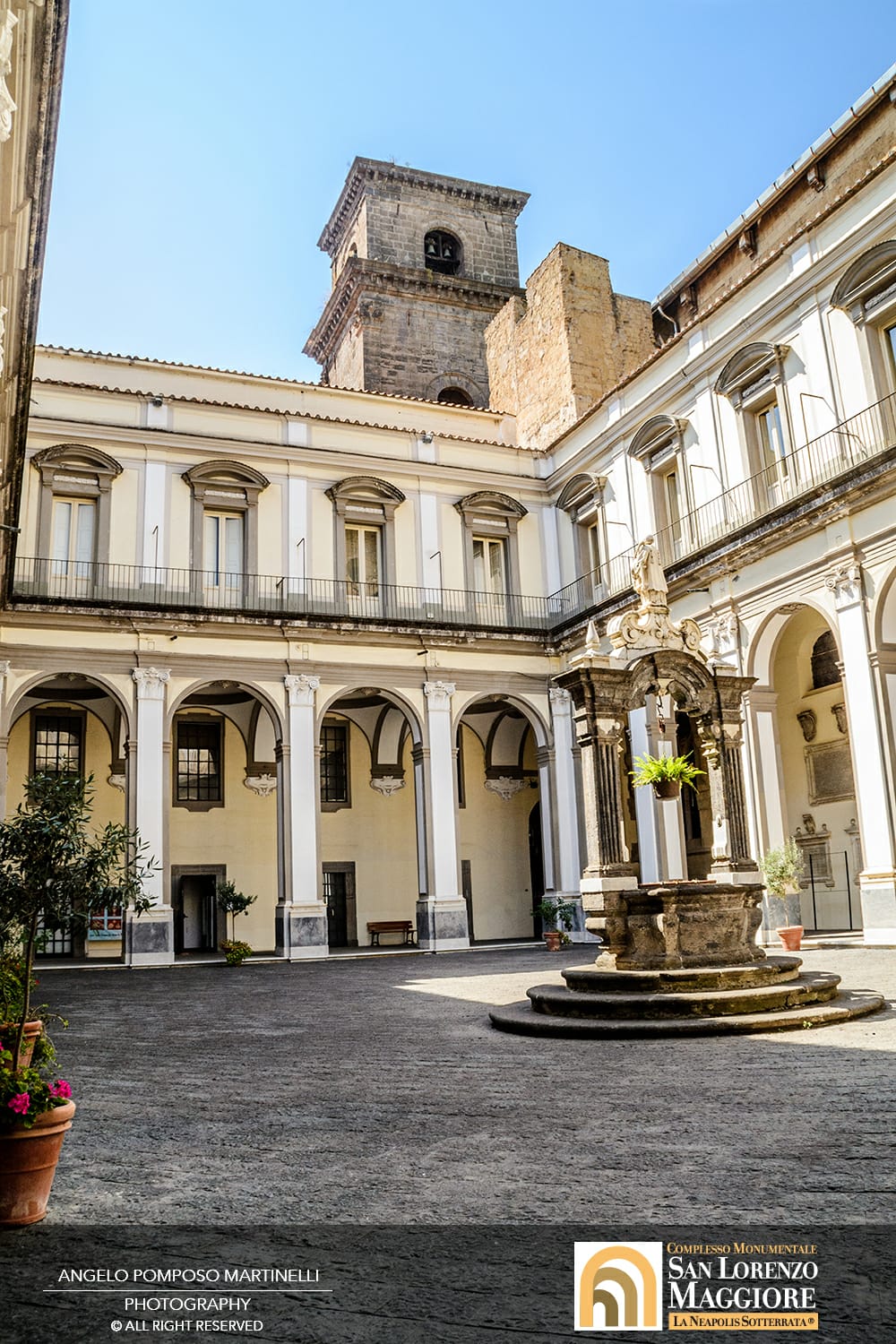 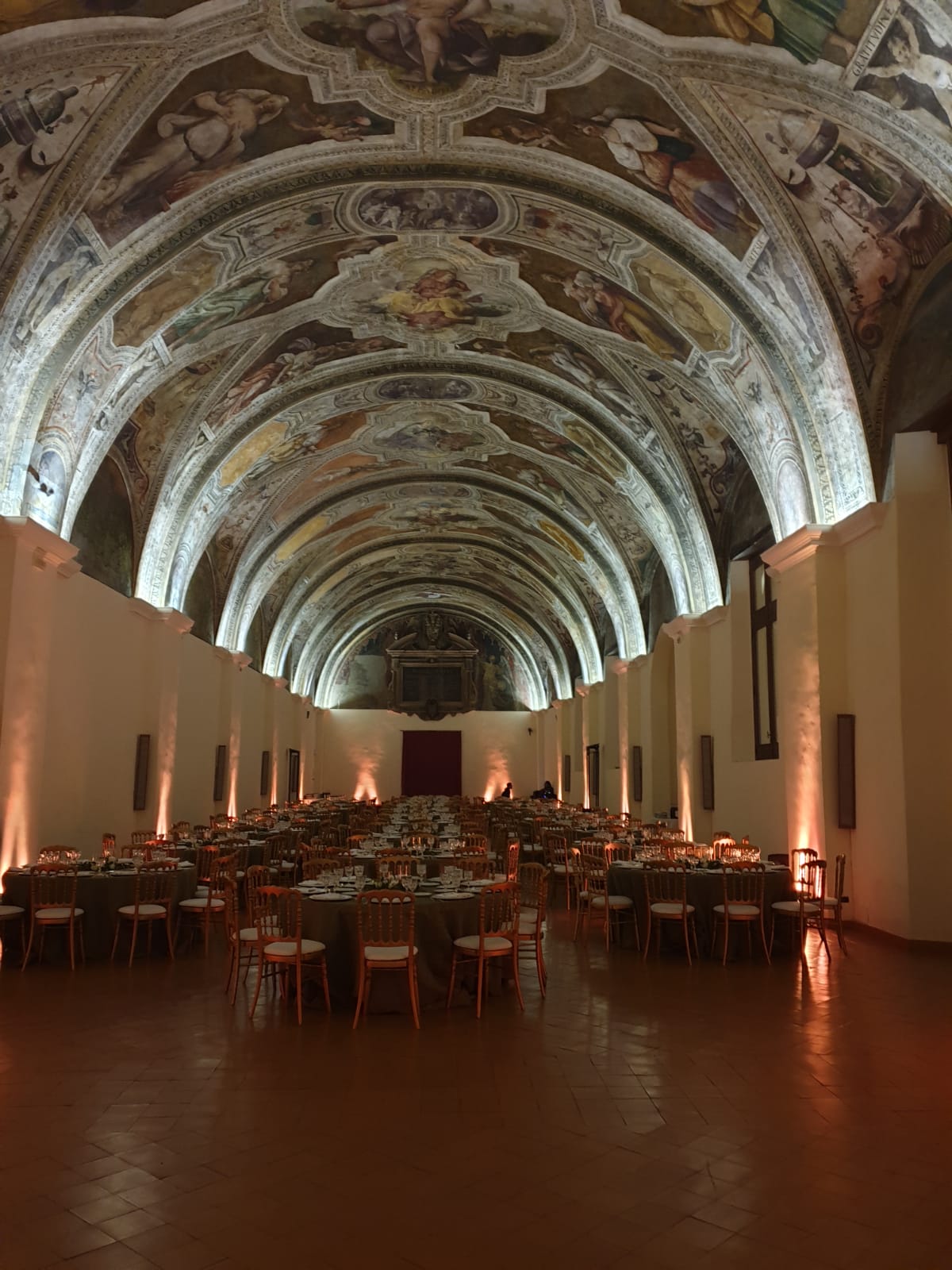